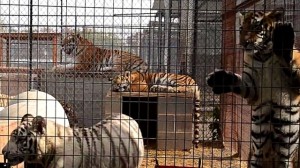 The arm of a woman who works at the Garold Wayne Interactive Zoological Park in Oklahoma was nearly torn from the woman’s body last week following a mauling during a seemingly routine Saturday morning.

The woman, Kelci Saffery, 27, survived the ordeal and vows to return to work after her full recovery. She also blames none other than herself for the mishap that nearly took her arm:

“On Oct. 5, I broke protocol and stuck my hand in a cat cage instead of using the stick provided,” she wrote in a public statement. “The cat let go and pushed my arm back through the cage … this tiger was not aggressive toward me.”

The problem with backyard zoos

Whether you’re an employee of a backyard zoo or an internationally known zoo housed in San Diego, you should know better than to stick your hand inside a tiger cage. Thus, for Saffery to admit her wrongdoing is good, but her accident still reminds us of this phenomenon known as “backyard zoos” and ignites the debate on whether these zoos ought to exist.

Backyard zoos run the gamut from tiny little gatherings of animals to massive compounds with hundreds of animals. Many backyard zoos aren’t accredited by the Association of Zoos and Aquariums and are privately owned. Organizations such as PETA and the Humane Society have admonished the idea of backyard zoos for years, while other organizations, such as NatGeo, have had reality shows revealing what life is like for backyard zookeepers.

Opponents of backyard zoos, sometimes called “roadside zoos” say that these zoos are designed for the sole purpose of amusing and entertaining customers, with animal welfare being second on the list. But zookeepers are not welcoming that idea with open arms.

Take, for example, the Garold Wayne Interactive Zoological Park (where this recent tiger mauling occurred). PETA and the Humane Society have complained about Joe Schreibvogel, who formerly owned the zoo but now owns the tigers housed in the zoo (including the tiger involved in the mauling).

In 2007, PETA wrote an article describing the zoo as “a total hole, with more than a thousand animals, including tigers, lions, cougars, bears, primates, wolves – you name it. The shady joint bills itself as a ‘sanctuary’ for rescued animals, but in reality the principal reason it exists is to line the pockets of the owner Joe Schreibvogel.”

But the Garold Wayne has always insisted that animals are the primary concern at their park. The zoo’s mission statement says the park focuses on “abandoned, misplaced and abused animals, as well as those animals who can no longer care for them.”

Following this recent attack (the first in the park’s history, Schreibvogel states), Cynthia Armstrong, the Oklahoma director of the Humane Society reported that she wasn’t surprised the incident occurred.

Zoos feature some of the most beautiful, and dangerous animals on the planet. There’s a reason why public zoos need to be accredited – there needs to be some sort of common understanding of safety rules for the public, methods of handling and treating animals, and more. While America is the home of capitalism, where we can all do what we want, public safety trumps that right (drug dealers don’t receive the same respect as real estate agents, for example).

While backyard zoos aren’t running amok, they still expose the public to a risk that’s unnecessary. If the Garold Wayne Interactive Zoological Park was indeed a private sanctuary, focused solely on the rehabilitation and welfare of animals, then their existence would be less concerning (although probably not for PETA). The public wouldn’t be in direct contact with animals.

But one look at the zoo’s homepage will help you realize that they’re bread and butter is drawing families into their gates. They’re boasting a Halloween-themed event (and have events for holidays all year long), meaning they want people of all ages to come to their park.

Having the public in such close proximity to animals invites a new level of concern to any zoo, not just the Garold Wayne. Being privatized means that zoos like the the Garold Wayne aren’t held under the same level of scrutiny as public zoos. Yes, there are still rules and regulations they must abide by, but having to be accredited with an established entity such as the Association of Zoos and Aquariums adds another layer of security, accountability, and peace of mind.

PETA might think that every backyard zoo is dangerous and harmful to animals. Blanket statements like that are neither fair nor true, but it is safe to say that backyard zoos that aren’t accredited with the AZA have to abide by fewer standards than zoos that are. Which type of zoo would you rather visit?