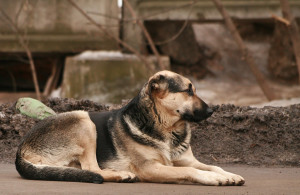 Bloomberg News made headlines everywhere when they published a story on August 21st that claimed 50,000 stray dogs are roaming the streets of Detroit. Although many have disputed the number, none have disagreed that Detroit has a serious animal control issue. Poverty has increased and public budgets, including those of the animal control department have decreased in recent years. Unfortunately, when unable to feed your family you are also unable to feed your dog. This leads to some people turning their pets into humane societies in the hopes they will find homes elsewhere and others simply letting them go on the streets in the hopes that a kind neighbour will feed them.

Almost 70% of all dogs that end up in Detroit animal control are euthanized. The dogs are picked up off the street and can be found congregating in abandoned homes and warehouses where they end up living as a pack and, in too many cases, breeding and producing more unwanted puppies. When roaming in packs, the dogs can pose a public safety hazard. Hungry and emboldened by desperation, the dogs may resort to attacking other pets and even people. In parts of Detroit, mail delivery is periodically halted for the safety of the mail carriers. The problem is further compounded by criminals breeding dogs for fighting and tossing the failures out on to the street. Add to that the many pets whose owners allow them to roam without supervision and you have a recipe for an out of control stray population.

Animal rescue groups are trying to assist with spay-neuter and vaccination programs and are trying to build a no kill shelter. It is important for dog owners, regardless of where they live, to take responsibility for their pets. Allowing your intact dog to roam the streets is not only irresponsible, it is also a public hazard and there should be repercussions for it. Pet ownership is a privilege and it comes with certain responsibilities. Obviously, you cannot always foresee an economic downturn and loss of income that leads you to be unable to care for your pet. Should that happen though, it is important to either attempt to find your dog a new home or turn him into a shelter or rescue group. Abandoning him on the streets, when he has never had to fend for himself is simply cruel. Euthanasia is kinder than dying on the streets at the hands of strangers or starvation.