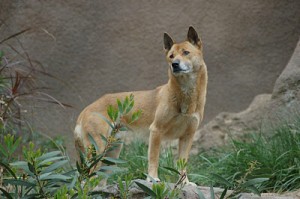 Tom Hewitt, of Adventure Alternative Borneo Tours, as well as he group he was guiding, saw a rare sight while high on the Mandala Mountain in West Papua, Indonesia. They managed to photograph a New Guinea singing dog. This was the first photograph of a wild singing dog taken in over twenty years. Many had feared the animal might even be extinct.

There are 200 of the New Guinea singing dogs, Canis dingo hallstromi, in captivity in zoos and homes across the world. Almost all are descended from less than ten wild singing dogs caught in the highlands in New Guinea in the 1950s and exhibited at a Sydney, Australia zoo. This means that the genetic diversity of the captive populations is quite low and they have begun to develop fertility issues. A wild population represents an opportunity to increase genetic diversity, if scientists can find them.

New Guinea is the second largest island in the world at 785,753 square kilometres. At least eight percent of all the world`s species are found there and more are being discovered. The singing dog lives high in the cloud forests in areas that are very remote with heavy vegetation. People, even the native tribesmen, rarely venture into the region.  Trail cameras have been set up in the area that the photograph was taken in attempt to capture more footage of the singing dogs.

The fossil record dates the species back at least 6,000 years. They have been genetically linked to other known ancient dogs such as the basenji, the Canaan, saluki, Siberian husky, Alaskan malamute, Akita, Samoyed and Afghan hound. All are considered to be very primitive dogs with close links to wild canids. The singing dog is currently considered a wild canid and is believed to be related to the Australian dingo.

A land bridge once connected Australia and New Guinea and it is believed that the species was one of many that migrated to New Guinea. It has lived in isolation in the wild since the bridge flooded thousands of years ago.

New Guinea singing dogs have extremely flexible joints and spines, almost catlike, which they use mainly for climbing and jumping, unlike most dogs and wolves. At only seventeen inches at the shoulder and twenty-five pounds for an adult male, they are not large animals. Their most unique feature though is surely their voice. They have a specialized structure in the back of their mouths that allows them to sing. The songs are complex and have been compared to the songs of the humpback whale. It is believed that they use their songs to communicate with other singing dogs.

The debate on whether they should be recognized as a separate species or subspecies will likely continue. During their known history, they have been considered both and also as a domestic dog that became feral over time. This new discovery of singing dogs in New Guinea`s highlands may help put the debate to bed once and for all. At the very least it will hopefully shed more light on our long and unique relationship with dogs.