Home Care & Health Should Pit Bulls be Sterilized to End the Breed? 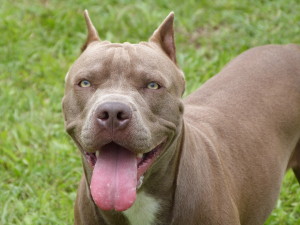 The Riverside County Department of Animal Services (in California) has put forth a proposal to require all full and mix-breed pit bulls to be sterilized as a way to minimize the potential harm these dogs can cause to Riverside residents.

According to The Press Enterprise newspaper, the proposal would “mandate the sterilization of all Pit Bull type dogs. Reducing the fertility of  this segment of the dog population is the only effective way to mitigate these negative impacts on the County and its residents.”

According to the proposal, pit bulls and pit bull mixes negatively impact the safety of the pets and people of Riverside, although no specific incidents are cited in the proposal. Furthermore, the proposed ordinance states that pit bulls make up 20% of all impounded dogs, yet have “very low redemption or adoption rates.” In other words, these dogs are taking up valuable real estate that could be used by more “adoptable” dogs.

Why it’s a good thing

Proponents of a move like this don’t just speak about the dangers of pit bulls, but they actually pull at the heartstrings of the more sympathetic.

One common argument in support of this move is that sterilizing pit bulls is far more humane than:

Some proponents even go as far as to say that more dogs should be sterilized. There are far too many dogs to begin with, waiting to be adopted. Pit bull or not – sterilize and spay/neuter!

Of course, proponents of sterilizing pit bulls will also bring to attention the media spotlight on pit bull attacks. If a chicken quacks long enough, we’re going to think it’s a duck. The same can be said about pit bulls. If pit bulls keep being the subject of attacks on other animals and humans, then why shouldn’t we believe they are dangerous? By sterilizing existing pit bulls, down the road our society will be a safer place, without having to instill some sort of genocide.

Why it’s not a good thing

Opponents of a move like this, such as the American Pit Bull Terrier Association, sees this as just another example of the dangers of media bias. In fact, the ASPCA has publicly stated on their website that animal control officers have told them that the media has little interest in dog attacks, unless a pit bull is involved. This purported bias would surely sway our opinions. Propaganda has been doing that for generations. Are pit bulls actually as dangerous as they’re made out to be? Opponents of sterilization would say an emphatic NO.

Of course there’s also the ethics argument. Should we, as humans, be given the power to weed out a breed of dog? There are, of course, arguments in support of both sides. Those who believe we do have that right would cite that we created these breeds to begin with. Dogs have been a human science experiment for centuries. No one batted an eye when one German shepherds, boxers, dalmatians and beagles were created. And besides,  there have been times when we’ve ended the existence of a species who were deemed “invasive” to an environment.

The question is, are pit bulls invasive to our environment?

Those against the idea of granting humans such power would argue that a careful examination of dog attacks would show that irresponsible owners are to blame more often than not. Yes, dogs with a checkered past can carry with them a more volatile demeanor, and not everyone has the skills or time to properly rehabilitate such a dog. Pit bulls tend to have harsher pasts than other dogs (because of humans’ decision to turn them into fighters). However leashes, fences, and muzzles are preventative measures that severely cut down the potential of a dog attack, be it from a pit bull or chihuahua.

Let’s replace ‘pit bull’ with another species, shall we? What if Riverside County officials said they’d like to sterilize chipmunks because of the danger and damage these animals could cause to pets and people. What would your response be? If you think that move is okay, but are opposed to pit bull sterilization, ask yourself why. If, however, you’re as opposed to the chipmunk sterilization as you are to pit bull sterilization, then you have a clear picture of where you stand, don’t you?