Home News Seals on Board! 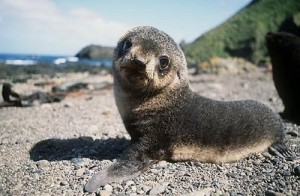 Ethan Janson is a 41 year old sports-photographer-turned-dentist, Seattle native that lives near the Puget Sound in Washington state. He had noticed that the local seals enjoyed sunning themselves on his neighbours’ boats during the summer months. When the boats departed in the winter, the seals had nowhere to soak up some rays. This led him to tether his surfboard to a marine buoy for the month of October. He attached a waterproof GPro camera to the board and recorded each day’s activity.

The result is 3 minutes and 44 seconds of toil and triumph by a bunch of baby seals that take cuteness to a new level.  Newly weaned from their mother, several harbor seal pups between the ages of six weeks and three months do their best to conquer the board. The video is now up on YouTube and has almost a million and a half views since it was posted on March 8, 2013.

Most people are aware that seals can be trained to do a number of amazing tricks. Their agility and ability to learn new tricks make them favourites in marine animal shows. In the wild their agility helps them feed and evade predators such as sharks and orcas.

While Janson’s seals discovered the surfboard on their own, many people have taught other animals to surf or at least hold on to the surfboard while out on the surf. There is even an annual competition for surfing dogs held in Huntington Beach, California. It’s called the Surf City Surf Dog Competition. Other animals that have learned to surf include mice and rats, alpacas, cats, goats, ducks, and capybaras. On the list of most unique water activities, we have a group of water-skiing gray squirrels.

Tillman, a bulldog known for his skateboarding skills, has also taken up waveboarding. The award for best surfer though should go to Ricochet, a five year old golden retriever. Ricochet not only surfs and wins contests, she also acts as an assistance dog for disabled surfers. She is also an active fundraiser for a variety of charities, including Patrick The Miracle Dog. She has pawticipated in over 150 fundraisers and raised over $300,000 for charity. Ricochet also makes inspirational videos.

Whether you enjoy surfing yourself or not, you cannot help but admire the agility and persistence of its animal fans. Whether it is learned or just a new toy they happen upon, it is obvious that it can hold as much fun for animals as it does for people.