Home Behavior & Training Running With Your Dog – Races and Tips 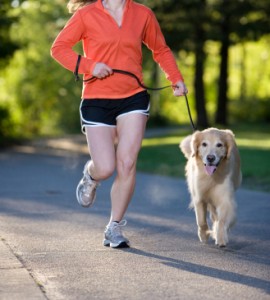 There are so many benefits to running with your dog. First, it’s healthy for both of you. Second, it’s a sure fire way to bond with each other. Third, It’ll tire out your dog like nothing else. Fourth, if you need some motivation to run a little farther, or push a little harder, your dog is a great workout partner.

For those of you in winter-laden areas, spring is just around the corner. This is a perfect time for you and your dog to entertain the idea of becoming running partners. But before you strap on your running shoes, there are some things to consider to make sure you don’t hurt yourself, or your dog, when you hit the pavement.

Tips to help you run safely, and happily, with your dog

Some dog races across the country

Not every formal race in the country is suited for dogs. In fact, most of these races forbid pets (because of insurance issues, etc.). Therefore, it’s important that you find races that are specifically designed and created with your four-legged friend in mind. Below are some races in 2013 that you could sign up for. If you don’t find a race near your home, consider starting one up!