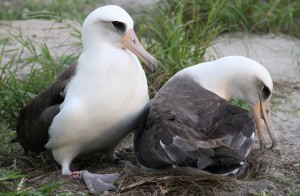 Wisdom has done it again. Believed to be the oldest living wild bird in the world, Wisdom is a Laysan albatross. She is at least 62 years old and recently hatched her sixth chick in a row, possibly her 35th chick in her lifetime. She has travelled two to three million miles in her life and she is still going strong.

Wisdom was first banded at the US Midway Atoll National Wildlife Refuge in 1956 by Chandler Robbins. Along with several other Laysan and black-footed albatross, she was nesting. Laysan albatross do not begin to nest until they are at least five years old and sometimes not until they reach their 8th or 9th year. So, Wisdom may be older than 62. Until they begin to nest, albatross live at sea. After that they return to land to nest at most once a year when they will lay a single egg. They sometimes skip a year. It is easiest to band albatross when they are nesting as they will remain to defend their nests. Mind you, they defend their nests very vigorously and have no issues with going after anyone who gets near their nest. They have been known to bite potential intruders in the behind when they get too close. Equipped with a bill and claws, both of which are long and quite sharp, they are not necessarily easy to band.

Although albatross are generally long-lived birds, Wisdom has lived more than twice as long as the average lifespan of a Laysan albatross. She has done so despite many risks that albatross face including getting hooked on long lines meant to catch fish and poisoning through the ingestion of lead paint that can still be found on some Midway Atoll buildings. One of the biggest risks is that they eat some of the pieces of plastic that litter the Pacific Ocean. If the plastic itself does not kill them by either choking them to death to blocking their intestines, it can still create a blockage in the stomach that leads to starvation. Nineteen of the twenty-one species of albatross are considered threatened at this time, according to the International Union for the Conservation of Nature.

The oldest wild bird ever according to the Guinness Book of World Records was an 82 year old Siberian White Crane although they have been unable to obtain conclusive proof of the bird’s age. Captive parrots are known to live eighty years or more. In general, larger bird species live longer lives than smaller species.

Albatross spend most of their lives at sea and cover tremendous distances each year. According to the United States Geological Services, Wisdom has likely flown two to three million miles in her lifetime. That is the equivalent to four to six trips from the Earth to the moon and back again. It lends credence to those who say that exercise increases longevity.

Wisdom shows no signs of slowing down and hopefully she will return to the Midway Atoll again next year to nest. At 94, Chandler Robbins would like to be there to see it but suspects that the trip would be too much at his age.