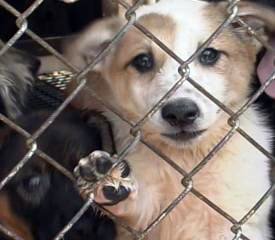 As you peruse the puppy section of your local pet store in the hopes of finding a new member for your household, don’t forget that the lovable animals you are looking at may have had very unpleasant beginnings. Puppy mills aren’t as uncommon as many animal lovers would like to believe. In fact, there’s a good chance that the puppy in the store window came from a commercial operation that prioritizes profit at the expensive of their animals’ health.

Squalid living conditions with poor sanitation and poor breeding practices expose “mass-produced” puppies to many health problems. Internal disorders, including heart and kidney disease, are more common in mills. Contagious diseases are also prevalent and can spread between cages in confined areas rapidly. Mange, kennel cough and distemper are just a few of the pathogens often found in mills, according to the ASPCA.

Mill puppies are usually not properly socialized before being advertised or sold to a pet store, so they may be aggressive or fearful around people and other animals. Many are removed from their mother at around six weeks old, which can cripple their ability to socialize in the future.

You can’t tell much about puppies or their breeder from an advertisement in the newspaper or online, so make sure you learn as much as possible before purchasing a new pet. There are a few “red flags” to look for if you are concerned a breeder is functioning as a puppy mill, according to PAWS.org:

1. The person or group selling the puppy has many other dogs, and types of dogs, for sale.

2. The seller doesn’t allow you to view the area where most of the dogs are kept or that area is concealed from outside view.

3. The seller doesn’t conduct an interview or show interest in who is buying their puppies. Legitimate breeders love each and every one of their puppies, they really do care who takes them home.

4. The breeder has a “no return” policy of any kind on their dogs.

When purchasing a pure-bred dog, always ask to see the pup’s parents. Make sure the mother and father are friendly and in good health before committing.

Even if you have your heart set on a particular breed, you should check out a few local animal shelters before purchasing from a store or breeder. Dogs of all shapes and sizes enter animal shelters by the thousands every week. Adopting is less expensive than buying a pet and helps takes the burden off of a network of mostly non-profit organizations that have their hands full dealing with a massive overpopulation of dogs and cats.