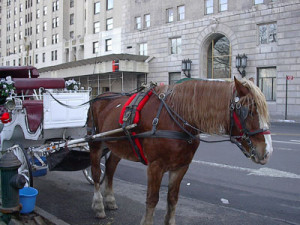 Will NYC Carriage Horses Be Banned With a New Mayor?

She may have dogs, but animal activists say mayoral candidate Christine C. Quinn is no animal lover. An ever-growing number of activists are voicing their opinions about Quinn in an effort to help elect a more animal-friendly mayor into office once Mayor Bloomberg’s final term is completed.

This could mean the end to an NYC tradition.

At the center of this controversy are the Central Park horse carriages. Quinn, much like her political ally, Bloomberg, supports the carriages, stating that these horse carriages employ 300 people and are a valuable source of income, even in the most economically difficult times. But animal rights activists not-so-politely disagree.

They claim that this is a basic form of animal cruelty. These horses travel through mid-town at busy times, and are periodically hit and injured by cars. They are concerned with the overall treatment of the horses, as well as their living conditions. In fact, as City Council speaker, Quinn herself sought to improve the horses living conditions, including requiring bigger stalls and heavy blankets.

One of Quinn’s democratic opponents, Bill de Blasio, is taking advantage of this controversy. “I grew up with the romantic notion that this was part of New York City culture,” he told the New York Times. “I had not really thought honestly about the ramifications of it.”

Now, he claims, he has thought of the ramifications, and wants to do something about it. On his first day in office, if elected, he’d ban the carriages, he said. And it’s not just horses. de Blasio is using this horse carriage controversy to catapult himself as the animal-friendly candidate. This past week he pledged to require sprinkler systems in all pet stores.

To Quinn’s credit, it’s not like she’s hunting cats and forcing dogs into slavery. She has two rescued dogs, whom she walks nearly every morning in her Chelsea neighborhood. She’s sought a no-kill policy for city shelters; she’s fought for laws to increase financing for animal care.

But the horse carriages are a sticking issue, at least for heavyweight activist Gloria Steinem, who has backed de Blasio for mayor and admits the carriage horse industry is a lingering issue between Quinn and her.

In the end, are the horses in Central Park a worthy cause to fight for, or are they being used as political pawns in the hopes to gain sympathy votes? Mayoral candidate Sal F. Albanese just wants these candidates to stop horsing around: ‘Bill says on the first day he’s going to ban horse carriages,” Albanese told the Times. “I’m worried about creating jobs on my first day.”