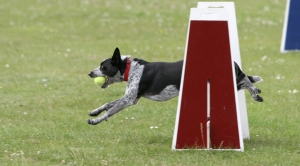 For two centuries purebred dogs have been pampered, worshipped and revered within the confines of the aristocratic Westminster Dog Show, the most prestigious show of its kind. The purpose of the Westminster Dog Show is to celebrate the specific beauties and abilities of some 190 breeds (three of them just coming on board this year), through various performance tests and examinations, including an agility test.

It is this agility test that – this year – will be opened up to 225 “mutts,” thus making Westminster potentially moving toward a more contemporary and progressive approach to inclusion.

And while the inclusion of unpedigreed dogs in Westminster is a significant step forward, other clubs have been opening their doors to all dogs for years. The Mixed Breed Dog Clubs of America group has been around for nearly 40 years, holding mixed-dog shows for every mixed breed around. And, in fact, the American Kennel Club – the governing body behind the Westminster Show – has been allowing mixed breeds in competition since 2009.

When the Westminster first began, it wasn’t all about the purebreds. Mixed breeds originally competed at the show, but it didn’t take long before the purebreds took the show over, thus kicking mutts out … until now.

In the years in between the inclusion, Westminster has often been used as a pawn in the purebred/mixed-breed debate. On one side are purebred proponents who say that preserving historic traits is important, if for no other reason than to ensure good human-dog pairings (including ensuring a dog makes a good guide dog, or police dog, for example). Opponents say that the push for purebreds fuels dog mills and keeps mixed breeds at shelters.

In the end, PETA isn’t happy

No matter what steps these dog shows take, PETA certainly isn’t happy. While Daphna Nachminovitch (senior vice president of PETA) has commented that this is a step in the right direction, she and the organization believe there have to better ways to help and treat dogs than with “supporting this antiquated entertainment show.” There are plans for PETA to demonstrate outside the show this year, as is usual per year.

But for the many dog owners out there who don’t spend hours per week training and pampering their pets … for the dog owners out there who let their dogs on their couches, and let them eat scraps from the table, and who think some of their annoying and potentially destructive behaviors are a bit cute … well, perhaps this move by the Westminster is one point for us.