Home Animal Welfare Is It Ethical to Keep Exotic Animals as Pets? 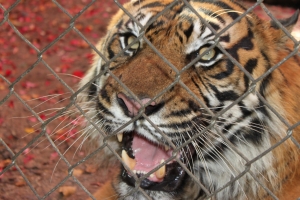 While it might be tempting—and legal in certain states and certain parts of the world—to keep exotic wild animals as pets, is it really a good idea? While some species seem to do just fine under the care of human guardians, the vast majority suffer. However, many people fall in love with the beauty of exotic pets, making impulse buying decisions before really thinking things through, while putting their safety and the animal’s safety and happiness at risk.

Caring for Exotic Pets is Difficult

Exotic animals are definitely harder to care for than domesticated pets. For example, reptiles need specialized care that, when not provided, can lead to serious illness and death. And the larger the animal, the more space it will need. Also, exotic species need specialized diets that are expensive and difficult to find.

You’ve probably heard plenty of stories about wild animals kept as pets who escaped from their homes or attacked their owners and their loved ones. Big cats, primates, and bears definitely belong in the wild, where they can live out their natural instincts without posing a threat to human safety.

So while it might be tempting to want to keep adorable baby exotics as pets, it’s always important to remember that, once these animals are fully grown, they pose a threat to your safety. And, unless you own a large protected sanctuary in which they can roam, they’ll live out miserable lives in cages, increasing the risk of them lashing out.

When exotic pets grow too large to control and care for properly, some owners end up dumping them off in the wild. Other pets end up escaping on their own. Either way, when these invasive species enter an environment they don’t belong in, they can wreak havoc, consuming native species of animals and plants while spreading diseases. For example, amphibians and reptiles carry salmonella, while African rodents and monkeys carry herpes B and monkey pox.

Where Exotic Pets Come From

Animals that enter the exotic pet trade are often stolen from their wild homes in areas of the world that include South America, Africa, and Australia. Even eggs from birds and reptiles are stolen. Removing these animals from their native habitats puts the environment itself, as well as other species within it, at risk because every species plays such an integral role in the balance of the environment from which it comes. This also decimates the wild population of that species, putting it at risk of becoming endangered or extinct.

Birds, reptiles, small mammals, and even large species are transported, many times illegally, in inhumane conditions. Small animals are often stuffed into tiny containers to be hidden from security officers, and many don’t make it out alive.

If you love wild animals, it’s best to respect their needs and let them live out their natural lives where they belong, observing them and admiring them from a distance. With so many pets in shelters needing homes, you can always adopt a new cat, dog, bird, reptile, or rodent who will be easier to care for and provide you with plenty of love.