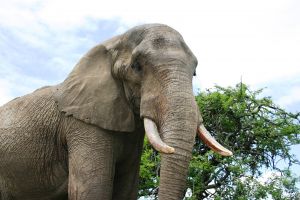 The future of elephants is in serious jeopardy unless we do something about it now. That, according to the International March for Elephants, a campaign designed by iworry that claims that by 2025 no elephants will remain on earth, if we continue to ignore the problem.

So what is the problem? Ivory, or, more specifically, ivory poaching. Of course, ivory poaching isn’t anything new. But how it still remains is a bit concerning, as a ban on the international sale of ivory was enacted in 1989 … 1989! The ban did provide relief for elephants, for a time being. Some regions were killing up to 80% of herds, but the ban helped to prevent this from going any further.

But nothing lasts forever. Not even good things. In 1998 and 2008, there were two “one-off” sales of ivory made to Japan and China (according to Dr. Dame Daphne Sheldrick, DBE, founder of the conservation charity, The David Sheldrick Wildlife Trust). Following those one-off sales, poaching has now reached scary highs, once again. The sales to Japan and China stimulated demand, and as a result, elephants are being poached at the highest rate since records of these numbers began.

Current statistics show that some 36,000 elephants are killed yearly, which is the same as saying one elephant every 15 minutes.

Manufacturing a movement with the March for Elephants

With these staggering statistics, the International March for Elephants aims to put a stop to the genocide through awareness and tougher laws. The IME has a list of demands including:

A thing or two about elephants

What is it about elephants that we find so majestic? Sure, we might think it’s just their sheer size – they are the largest land animals and (fun fact) are the only land animals that can’t jump! Of course, since they have no natural predators (aside from poachers), they don’t really need to jump, do they?

Aside from their size, however, there are many other attributes that an elephant possesses that we are fully enamored by.

Scientific studies have shown that elephants seem to have the same emotions as humans. They are family oriented and mourn for their dead. And, like humans, elephants have their own distinct personalities. Some are playful, others are a bit mischievous, and so on. But they aren’t just “like” us. They also can do things we wish we could do. For example, they can communicate over a long distance using a low-range sound that we can’t even hear (no wire-tapping on that). Studies have shown they have telepathic capabilities and they can also sense seismic activity through their feet.

Yet, for all the beauty and majesty of the elephant, it could all disappear in just a few short years, unless changes are made.

Want to learn more about the elephant crisis and how you can help? Visit iworry.org now.