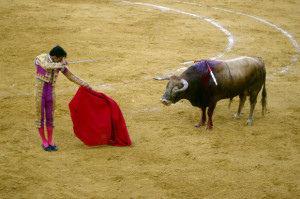 They call it a dance. A graceful compilation of movement equal to the brushstrokes of a painter. But neither the waltz nor impressionism end in the slaying of a living being, which is why so many people have a hard time accepting bullfighting as cultural. And while there are forms of non-lethal bullfighting being practiced today, opponents of the sport claim that the cruelty begins weeks and even months before the actual event takes place.

Still, there is more than a massive amount of supporters worldwide who laugh at those people who refer to bullfighting as a bloodsport. They cry foul, equating it to Americans not understanding cricket, for example.

So, is bullfighting culture, or cruelty?

Bullfighting involves toreros of different levels, with the highest level of torero being called the famed matador. These toreros practice the art of bullfighting and pick up their own style of movements that are easily identified in the ring. People can identify a U2 song because of the Edge’s guitar sound; they can identify the make of a sports car because of the sound of the engine. Well, bullfighting enthusiasts can often identify a bullfighter, or at least the style of fighting he learned, by the movements he makes inside the ring.

These moves are made while the bull is within close proximity of the torero, and while there is a great level of risk involved whenever you’re in the same ring as a high-strug, massively sized beast like a bull, there are some “special” circumstances that are put into place that help give the bullfighter an upper hand, most of which take place during the first portion of the fight.

Bullfighting rituals can change by region, but it’s often broken down into stages, or thirds, named Tercio de Varas (third of lances), Tercio de Banderillas (third of flags) and Tercio de Muerte (third of death). In the first stage the bullfighter sizes up the bull, his energy level and movements. Then two picadores come out with their lances and, get this now, blindfolded horses. This blindfolded horses are bait. The bull will see these horses and attack them. Using this as a distraction the picador will stab the bull in that mound of muscle on the bull’s neck. While this is happening, the bullfighter will take note of the preferred attacking style of the bull.

If all goes well in this first stage, the combination of blood loss and force exerted by the bull to left the horse up with its neck and horns will cause the bull to drop his head lower for the remainder of the fight. This makes the bull far more predictable and less dangerous. The bullfighter now has the upper hand.

Stage 2 is a bit of a misnomer. We’re not talking about real flags here that we wave in the sky on Fourth of July. We’re talking about sharp, barbed sticks planted into the bull’s shoulders. These are forced into the bull’s body by three banderilleros, although their attempts aren’t always successful. If they are successful, well, the bull is even further weakened, but also pretty angry.

Before this final death blow, the matador performs different passes that are like a tango. It’s called the faena, and it’s the entire performance with red cape that we all know about bullfighting. The final series of passes leads to the bull being positioned for the kill, which comes at the hands of a thrust of the sword between the bull’s shoulder blades and through his heart. This final thrust is tricky, and the bullfighter must be careful with his approach so as not to fail the audience.

If the estocada (sword thrusting) is unsuccessful, the bull still gets killed. It’s just not as poetic as was intended. The matador is forced to prick the bull’s nose to lower his head and then severs the bull’s spinal cord. If, after that, the bull is still not dead, then a dagger is used (by another participant, not the matador) to completely pierce out the spinal cord.

Sometimes the bull’s body is dragged around the arena as an honor, if the presiding official was impressed with the animal. Sometimes (we mean rarely) the bull is granted a pardon for a “fine performance” (meaning the audience will wave its handkerchiefs before the estocada) and the matador will symbolically free the bull. If that happens – again, that’s rare – the bull will never fight again as it’s unwise to let a knowledgeable bull back into the ring.

If the matador did his job particularly well, then he might be awarded an ear of the bull. If he did extraordinarily well, my gosh he might get both ears, and even a tail!

Bullfighting dates back to the 12th century, when soldiers who were fighting off boredom decided to fight animals. But most animals (deer, for example) were far too docile. After trying out various animals, the bull was decided as the most formidable opponent to such fierce soldiers as these knights. And thus bullfighting was born. The first bullfight took place in 1133 in honor of the coronation of King Alfonso VIII of Spain. That event led to the use of bullfighting as a way to mark important and historic events.

The sequence of events outlined above is the most typical description of bullfighting. Again, styles vary from region to region, and in some instances death is not a part of the sport, although that’s a significant minority. So that leaves you with this question to answer:

Is bullfighting a cultural staple of Spain and other countries, or is it just plain cruel?