Home Behavior & Training How To Keep Your Dogs Off Your Furniture 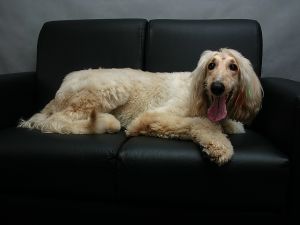 There I was, at the furniture store, excited to buy a spanking-new couch for the first time since … well, ever, when a thought hit me:

How will my dogs do with this couch?

The answer is, of course, not as good as I hope. But maybe, with some handy skills and dedication, I can keep my dogs off the furniture … this time. Here are some tips to help you if you find yourself in the same predicament.

1. Foil your dog’s plans – Tin foil can actually serve as a mighty good deterrent for your dog … if you don’t mind living in a world of tin foil. If your dog is obsessed with one spot on the couch, you could place pieces of tin foil on the cushions. They don’t like the rustling sound, and the feel is probably not so friendly either. Of course, they may just move to a new spot, so while you’re at it, cover your whole house with foil, except for that one little corner of the room where that expensive, but never-used dog bed sits.

2. Sell their spot – We don’t mean sell their designated areas to the highest bidder. We mean sell it to them, your pets. Convince them that the area you want them to be is just about the coolest place on earth. How do you do that? Well, make their designated area the coolest place on earth. That means giving them toys (bones are great, as they’ll stay still forever while they chew), treats, and even coming by their crib for a few minutes of hangtime. Kids don’t learn to eat their veggies by watching their parents avoid them like the plague. If you want your dog to hang out in his spot, you have to be ready to play ball.

3. Say it with spray – Here’s my least favorite method, but it works for some. Spray bottles can be used in two ways, neither of which are really all that good. You could spray your dog with water every time he jumps on your couch. But that’s a bit of nasty training isn’t it? It’s far more effective to let the dog decide on his own that elsewhere is better than the couch, and besides, you’ll also get your couch wet. The other way you can use a spray is with chew deterrents, like bitter apple. These work great for dogs who chew your router, modem and Apple TV and leave you scrambling to find a solution to all your life’s problems coming down at once (but that’s another story). But they don’t work so well for things you want to touch, let alone sit on. Just because you’re a dog doesn’t mean you, too, won’t be deterred by these sprays. And, they’re pretty sticky, so they’re not great for keeping your dog off your couch.

4. Maintain the train – The best way to keep your dog off your couch is to train him to go elsewhere. The “your spot is cooler” trick is great to use in conjunction with training. I’d recommend adding some tin foil to the mix to encourage your dog to seek alternative places of rest, and then rewarding heavily when he’s there. Use one word consistently as his no command, such as “off” or “down.” You’ll probably want to start with having him understand that command, followed by leading him to his spot. Once he gets to his spot (on his own, not by you taking him there), reward  him.

Once he understands that his “spot” means rewards, slowly (we mean slowly folks!) extend the time between his arriving to his spot, and you’re providing the reward. And, to make sure you’re always keeping him guessing, give him rewards sporadically whenever he’s near his spot.

There you have it, a quick rundown on how you can keep your dog off your couch. And, if you have doubts about his ability to abide by the rules while you’re away, do what I do: I place my little ottomans on my chairs/couches, so that I don’t come home to a land of fur.