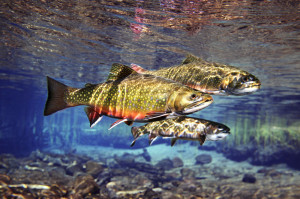 As a vegetarian, I’m often confronted with this: “Ah, but you eat fish, right?” The answer is no (at least currently), but my questioner’s argument is this: fish aren’t really animals. They don’t feel pain. So even a vegetarian can eat them.

Well, for starters, fish are animals (they’re certainly not plants or fungi), but the idea that fish do (or don’t) feel pain isn’t as obvious a conclusion to come to. For years and years it’s been argued that fish don’t feel pain, making it okay for animal lovers and vegetarians to eat this type of animal without overwhelming remorse.

But for as long as we believed that fish don’t feel pain, there’ve been studies trying to prove that belief wrong.

What exactly is pain?

Believers of the fish-feel-pain argument often reference the way a fish will struggle when hooked, or how a lobster will cringe as it’s dropped into boiling water. To our human minds, this is evidence of pain, but is that really the right word for it?

Cast a light or heat source onto a one-celled organism, and it’ll react, because it’s capable of identifying harmful (and helpful) stimulus and will move away (or toward) it. That’s what makes living beings survive this world. Fish, of course, are living beings, thus they can identify stimulus that might hurt or help them. But these reactions (the movement of an amoeba, the struggle of a hooked fish) aren’t coupled with pain sensations, according to animal researchers. These are reflexes, or knee-jerk reactions. Pain, on the other hand, adds a hurtful sensation to this reaction.

University of Belfast biologists Barry Magee and Robert Elwood conducted a study involving the shocking of shore crabs to determine if crabs could feel pain. Some crabs were fitted with insulated copper wire around one of their walking legs, with the other end of the wire connected to an electric stimulator.

Other crabs were free from the wires.

Both groups were given a choice of two shelters to go into. If any of the wired crabs entered the same shelter they chose before they were fitted with their wires, they were shocked. This test was continued ten times for each crab, with a two-minute break between tests.

Despite the self-mutilating behavior of the crabs, there was still debate whether these crabs felt any pain. University of Texas-Pan American neuroethologist Zen Faulkes said that this behavior could have been a result of the crabs feeling an unnatural stimulus, rather than from actually feeling pain.

Penn State University biologist Victoria Braithwaite, in her 2010 book Do Fish Feel Pain?, stated that a fish’s sensation of pain is clearly far less complex than a human’s, as a result of their basic vertebrate brain. However, she did state that regardless of the type of pain they feel, fish do in fact feel pain.

Not everybody is in agreement.

Will we ever know?

Is it possible to ever determine if fish feel pain? It’s troubling to think that more living beings would have to endure the type of experiments conducted on those shore crabs, but perhaps in the end, if there were no pain involved, the issue would become moot?