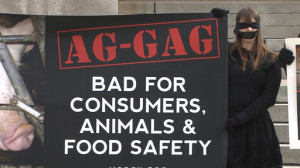 Amy Meyer was driving by the Dale Smith Meatpacking Company slaughterhouse in Utah when she decided to pull over and videotape what she saw: piles or horns littered across the property, cows being dragged across the grounds, one cow in particularly who appeared sick or injured being hauled off in a tractor “as though she were nothing more than rubble,” Meyer told the online paper Green is the New Red.

Meyer’s videotaping did not go over well with the slaughterhouse manager, Darrel H. Smith, the town mayor, who told her to stop. She made it clear that she was not on his property, and had every right to record anything she wanted.

At least that’s what she thought.

However, later on Meyer learned that she was going to be prosecuted under Utah’s new law (a law many people refer to as an “ag-gag law”) which is designed to prohibit undercover videos of farms and slaughterhouses.

The charges were eventually dropped, perhaps since Meyer was on the roadside, and not trespassing on private property (although Utah’s law is sketchy on those particulars). However, this brings to light the progress that these ag-gag laws have made over the course of the year.

Ag-Gag Laws aren’t that new. Kansas, Montana, and North Dakota all have had forms of this type of law in place for the last two decades. But in recent years more and more states are considering implementing rules that prohibit undercover videos of animal abuse. Much of this has come as a result of troubling videos made by groups like the Humane Society and Mercy for Animals. These videos were truly undercover, meaning that the videos were taken on the property of the farms (oftentimes by employees-turned-whistleblowers of the farm or slaughterhouse).

Most of the Ag-Gag laws don’t prohibit the ability to film from a roadside (like Meyer did). However, states are finding ways around this. For example, Pennsylvania’s proposed bill criminalizes anyone who “records an image of, or sound from, the agricultural operation,” or who “uploads, downloads, transfers or otherwise sends” footage using the Internet.

Tennessee’s bill passed, and is awaiting the governor’s signature. During the process, however, one state rep (Andy Holt) referred to the Humane Society’s use of undercover footage of animal abuse as no different than how human-traffickers use 17-year-old women. He claims that organizations like the Humane Society “seek to profit from animal abuse” using a “tape and rape” method.

Proponents of ag-gag laws share at least part of Holt’s sentiment. Proponents claim that if any animal abuse does take place at a facility, employees have the ability, and obligation, to report to authorities. Videos, they believe, do nothing but sensationalize the problem, and, in fact, those who videotape these abuses for use in supporting a cause are participating in the abuse. Those who videotape animal abuse ought to be required to submit the evidence to police, immediately, rather than to broadcast it to the world.

Opponents of ag-gag laws claim that employees are not likely to openly report abuses to authorities, because they aren’t quick to report themselves or their co-workers. Furthermore, opponents claim that these videos can be used later on as evidence of abuse, if formal charges are ever brought to light.

However, above all else, opponents of ag-gag laws claim that not being able to broadcast abuse severely limits their ability to inform the public of the truth. When people actually get to see and hear the abuse, they’ll realize the problem is far worse than they imagined. These images and videos might stir people into anger and, eventually action.

Currently Nebraska, North Carolina, Pennsylvania, and Vermont are considering ag-gag laws similar to that of Utah and Tennessee.

Well-known animal activists, such as Carrie Underwood, aren’t taken this ag-gag progress lightly. On April 18, soon after Tennessee’s bill passed, she tweeted this to her thousands of followers:

“Shame on TN lawmakers for passing the Ag Gag bill. If Gov. Bill Haslam signs this, he needs to expect me at his front door. Who’s with me?”

Well, who’s with her?