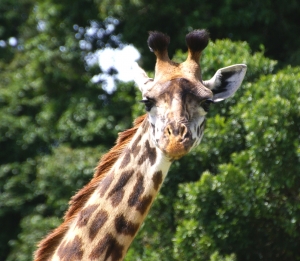 Children were among the curious crowd-gatherers who watched as an 18-month-old giraffe was butchered into pieces before being fed to lions. While the public demonstration might have turned many heads, it was the reason for the giraffe’s death that has sparked anger across the globe.

The giraffe was perfectly healthy – too healthy – and so it had to go.

That, according to zoo officials at the Copenhagen Zoo, who euthanized the male giraffe named Marius on Feb. 9, before feeding its remains to its captive lions.

Officials said that euthanizing Marius was a necessity and, in fact, was a good sign of the success of their breeding program.

“Copenhagen Zoo’s giraffe’s are part of an international breeding program which aims at ensuring a healthy giraffe population,” the zoo said in a public statement. “This is done by constantly ensu[ing] that only unrelated giraffes breed so that inbreeding is avoided.”

In the case of Marius, his genes were “well represented in a population,” meaning that further breeding with him was unwanted and unneeded. Since Marius no longer served a need as a breeder, the zoo announced that “there is no place for the giraffe in the  Zoo’s giraffe herd … agreed that Copenhagen Zoo euthanize the giraffe.”

The need to euthanize Marius means that the zoo’s breeding program is a success, according to zoo officials. But others are wondering why the giraffe had to die to make room for others.

Wildlife parks in the Netherlands and the UK offered to save not only Marius, but other “surplus giraffes.” yet the zoo declined. According to the Copenhagen Zoo statement, “Only zoos that follow certain rules can be part of international breeding programmes.” The Copenhagen Zoo is a part of the European Association of Zoos and Aquaria, which means it agrees to not sell animals … of course it also means the zoo agrees to look out for the animal’s welfare.

Others have wondered why the zoo doesn’t initiate a contraceptive program. In response to that, the zoo says it likes to allow the animals to breed naturally and carry out their natural behaviors. In addition, contraceptives can have nasty side effects and “we would therefore apply a poorer animal welfare if we did not euthanize.”

Not alone in death

It’s not like Marius is alone in his death. A recent report released by the “Independent” claims that up to 5,000 perfectly healthy zoo animals are killed each year across Europe. Much of the reasoning behind these deaths are to prevent inbreeding, which would dismantle breeding programs (although one might wonder if inbreeding would follow suit with a zoo’s mission to allow animals to carry out their natural behavior).

And while Marius received worldwide attention for his death (the public dismemberment of his body likely helped), six perfectly healthy lions were euthanized that same day, at Britain’s Longleaf Safari Park, without so much as a murmur. The reason for these deaths were due to an increase in lion pregnancies. Basically, the lion population swelled to a point that there was excessive violent behavior.

“In regards to the lions,” Longleat stated in a press release, “there has been a  large increase in pregnancies, resulting in a 40% increase in population. This has unfortunately resulted in excessive violent behaviour, putting 21 of them at risk.”

Is it time to rethink the way zoos handle animals?

People have significantly diverse views on zoos. Some feel they save animals, while others feel they mistreat them. Yet most agree that zoos attempt – or claim to attempt – to allow their animals to live as normal a life as possible, while also helping to maintain a healthy population.

You can’t help to think, though, that meddling with animals just because they’re successful in breeding is barely any different than hunting an animal in the wild. If a zoo’s goal is to allow animals to play out their natural behaviors, doesn’t that include allowing them to get angry at one another (likely a sign of the survival of the fittest theory)? Zoos are like the inconsistent parent that tells a kid “You can have that candy bar” but then punishes the kid for ruining his dinner. Except in the case, with animals, it’s more like “You can breed all you want, but then I’ll have to kill you.”