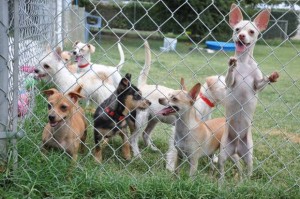 A lot of strange things happen in the desert. This strange event, however, comes at a price. Just four months ago, 89 dogs were heroically rescued from the home of an animal hoarder in the Mojave Desert, roughly three hours away from Los Angeles.

Four months ago was the dead of winter, January, and the Mojave Desert was coated in snow. Temperatures often hit below freezing. It’s no place for a dog to spend any considerable amount of time outdoors. It’s certainly no place for 89 dogs to spend outside. Perhaps that’s why the Karma Rescue got a call from a woman begging for help. The woman, the desert hoarder, claimed she could no longer care for dogs that had recently made their way onto her property. Could the Karma Rescue help her?

The Karma Rescue set into action, headed to the desert house, and discovered these 89 dogs in makeshift dog runs, or simply running wild around the property. As is common with most hoarding situations, there was feces all over the place. There was so much feces that it was nearly impossible for the dogs to eat their food (off the ground) without eating their own waste. It didn’t matter. These dogs were so hungry they were willing to eat anything.

The dogs were not cared for as they should be. They were exposed to the elements, underfed, and kept in dirty surroundings. But here’s the worst part: none of it was illegal.

Miraculously, all 89 dogs in the “Mojave Desert Dog Rescue” operation were saved, including Arwen, a pitbull mix that has garnered plenty of fanfare because of her quiet demeanor and specific ailment: her vision was horrible.

According to Karma Rescue, Arwin, and the other dogs, are lucky they didn’t go entirely blind. Living without shelter in the desert meant having to endure endless hours and days of sand-filled wind whipping at their faces. It was enough to injure (but not blind) Arwin.

Arwin’s teeth were a separate matter. The issue with dogs that are hoarded is that not only are they typically underfed and exposed to harsh and filthy elements, but they don’t get the organized playtime and exercise they need. Arwin, and many other dogs in her situation, chewed anything she found lying around, including wiring found around the hoarder’s compound. She chewed these things out of pure boredom, likely mixed with hunger. She had done so much chewing, in fact, that she lost most of her teeth.

How can this not be illegal?

Hoarding in and of itself is not animal abuse, although many people might think it to be. Some states (or cities and towns within states) have laws limiting how many animals are allowed per home, however, many states do not.

An animal hoarder isn’t an abuser in the sense that they are consciously placing the animal in harm. In fact, the very definition of an animal hoarder is a person who does not have the ability to care for his higher-than-usual number of pets, but is unwilling to accept that they need help. They are nearly incapable of realizing that they are harming their pets. In nearly all cases, the hoarders love their pets so much they can’t bear to part with any of them. This spirals into a case like the Mojave Desert hoarder.

There is a belief that animal hoarding is a disorder, which is why organizations are hesitant to claim animal hoarding as cruelty to animals. In fact, the ASPCA provides a “Hoarding Prevention Team” to help hoarders reduce their pets to a more manageable number.

Whether it’s a disorder or not, the effects on the animals are the same:

Not only is hoarding a health risk to the animals, but it poses a risk to the owners and anyone who lives with them. Overcrowding of any species (including humans) will likely deteriorate sanitary conditions, giving rise to a host of health risks including zoonotic diseases (which are human diseases acquired from another animal).

Hoarders fall into a cycle, meaning that it often takes an outsider to help stop the cycle from beginning. In order to do this, you must be able to know what to look for in a potential hoarder. Hoarders, unlike breeders, don’t care for a large number of animals properly. However, they can’t deny this need to care for animals, and might use the excuse of being a breeder as an explanation for why they’ve acquired so many animals.

The easiest way to tell if someone is, or is becoming a hoarder is to determine whether every pet is provided food, water, sanitation and vet care. If a person fails to meet these needs, yet continues to demonstrate a need to care for more animals, then they are at risk of becoming a hoarder.