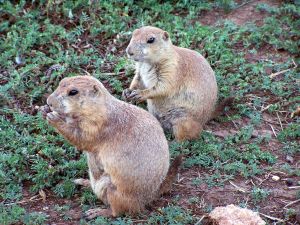 The prairie dog get a lot of love from his animal brethren. Turns out prairie dogs provide animals, like owls, a place to squat and crash, thanks to their endless tunnels and underground towns. And like any houseguest, the owl tends to pick up on some of his host’s habits and rituals – namely, the prairie dogs’ sophisticated alarm calls, which scientists view as a rudimentary form of grammar.

These little owls, who once, long ago, probably couldn’t speak the dog language, can now pick up on certain cues, warning them of lurking predators.

Western Owls tend to burrow near active prairie dog colonies, with part of the reason for this being because the grass is shorter in active colonies, thus it provides the vertically challenged owls a good view of potential threats. However, a recent study, to be published in an upcoming issue of Ethology, shows that owls are beginning to learn how to decipher the prairie dog language.

To test this hypothesis, scientists pulled a rubber snake through an active prairie dog town. The barking noises made by the dogs seemed to signify “snake.” When the toy snake was pulled through the colony, a few inches were missing, thanks to some defensive prairie dogs.

But it was the response of the owls that was more intriguing. Scientists played three sounds for owls: the barking in response to the snake, the sound of a low-flying airplane, and cows mooing. When the owls heard the barking, they began to squat low, chattered and bobbed their heads.

A wise man doesn’t know all the answers. He just knows where to look. Owls are wise to listen to the language of the prairie dog. Prairie dogs have the most sophisticated language yet decoded among non-humans. Their language includes nouns, adjectives, verbs and adverbs. That’s right – they can tell each other the size, shape, color and speed of an intruder. Walk in with a gray shirt, and a prairie dog will sound differently than if you walk in with a red one. By tapping into this vine, owls are getting direct access to a mighty complex and telling language.

Of course there’s good reason why prairie dogs have such a sophisticated language. They have a target on their backs. Many predators would love to get their claws on a prairie dog snack, from air and land. Hawks in the sky means you have to duck. Snakes in the grass means you have to stand up and scope out the scene. By creating a complex language, the prairie dog has been able to stay one step ahead of its enemies.

Eavesdropping across the kingdom

Animals love to eavesdrop. Owls aren’t the only ones who do it. Mammals listen in on birds’ calls, and vice versa. If someone cries wolf, it seems more than just sheep are listening. An entire network of communication exists within the underlinings of the animal kingdom, but perhaps none have such an impressive and almost humanly language (they have local dialects!) than the prairie dog.