Home Care & Health Truths and Myths of Declawing Your Cat 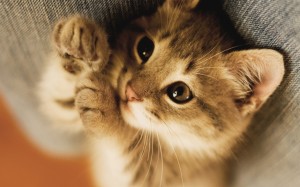 Pulling fingernails off with a pair of tweezers is something we imagine happens in some torture chamber during wartime, in order for someone to gain important information. But according to many people, that’s exactly what we do when we declaw our cats (and heck, they never tell us anything!).

Other people swear by it. They say their cats don’t mind, and, better yet, their furniture is forever saved.

So, which is it? Is declawing your cat an act of animal abuse, or is it the only way to save your couch, bed, and arm?

What is declawing … the truth

Declawing a cat is considered major surgery. It’s when you (well, your vet) amputates the front toes at the first joint (hind paws are typically not declawed). That’s the same as you losing not just your fingernail, but your fingertip, up to the first knuckle. It’s typically done to prevent cats from scratching furniture, people, or other pets.

It doesn’t hurt … the myth

Your cat will be under anesthesia when he gets the surgery, but that doesn’t mean that he won’t feel the pain. It’ll take several weeks for your cat to fully recover, and even after that complications have been known to arise.

Some people believe that the only reason cats have claws is to defend themselves in the wild, but that’s not true. Claws are used for other reasons as well, including:

Cats can’t be trained, so I have to declaw him … the myth

The number one reason why people declaw their cats is because of unwanted scratching. For one reason or another, pet owners have concluded that cats can’t be trained. Tell that to clicker trainers who’ve gone so far as to train their cats to use toilets (have you seen “Meet the Parents”?). The truth is, cats can be trained to use scratching posts and stop using furniture (heck, a cricket can be trained to jump through a hoop). Clicker training is a great way to shape your cat’s behavior, but there are other things you can do to make a scratching post more attractive to a cat:

Yes, it’s true, that in recent years, the laser declaw method has proven to be a better alternative to the old school method, which used a scalpel blade. But I suppose it’s worth asking: would you prefer to be operated on with a laser or scalpel if the surgery isn’t actually necessary? Your answer will likely be: Why do I have to choose? I don’t need the surgery.

Good answer. But assuming we go through with the surgery, laser surgery does have some advantages, including:

Declawed cats are more likely to bite … the myth

Studies have shown that declawed cats don’t seem to realize that they have no claws, thus they will continue to paw at you (or your dog), if they’re angry. They won’t resort to biting to make up for the loss of claws.

Declawed cats won’t use a litterbox … the half-myth

If you ever had your wisdom teeth pulled (or any teeth, I suppose), you know it’s important to not get food impacted in the surgical areas. The same goes for a cat’s paws. During the time of recovery (about 2 – 3 weeks) it’s important to use something like shredded paper to avoid litter getting impacted. Some cats turn their cheek at this litterbox alternative, thus, in some cases, a declawed cat won’t use the litter box for a brief while. But they don’t lose their litterbox instinct.

A declawed cat can’t defend itself, thus should remain indoors … the truth

Yes, yes, and yes! If a cat no longer has its claws, then he can no longer defend himself and should become an indoor cat. A cat’s claws are its strongest defense mechanism. Do it, and yourself, a favor and keep him indoors. We will note, however, that a declawed cat can still:

So, should you declaw your cat?

Sometimes it feels like we don’t have a choice in the decisions we make for our animals. If we live in an apartment that has no room for a scratching post, declawing may seem like the only way to go. Or perhaps your cat lets his paws fly like a conductor leading a rendition of “Flight of the Bumblebee.” In the end the decision is yours, but you should know the truths and myths behind your decision before you make it. Yes, it’ll hurt. No, it shouldn’t be completely life-altering. Yes, laser is the preferred method, but yes, it can be much more expensive. Yes, cats can be trained to use a post, and yes, it’s not necessarily quick nor easy to train a cat.

If you know anyone who has ever declawed a cat, get their opinion. Did their cat seem to be in pain? Did the cat’s demeanor completely change? Was it worth the stress and money? If you do choose to declaw your cat, remember that this is major surgery. Be patient as your cat recovers and heals from the trauma.