Home Care & Health Therapy Dogs: How Do They Help? 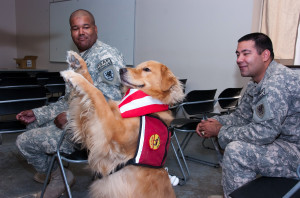 The use of dogs to assist people with autism is well documented. There have also been many studies that have demonstrated the positive effects of stroking and animal on blood pressure, stress levels, and mood in general. More recent studies have focussed on the benefits of dogs to veterans with post traumatic stress disorder (PTSD) and teenagers recovering from drug and alcohol abuse.

Dogs represent one of man’s longest and closest relationships with an animal and the two species have evolved together for over twelve thousand years. Studies have shown that a dog’s understanding of human facial expressions and gestures is better than that of humanity’s closest genetic relatives – chimpanzees. Perhaps it is this understanding that has led to their being such a benefit to people in times of distress.

PTSD is common in war veterans and other jobs like police officers and firemen. With time and treatment many of its sufferers will go on to lead normal lives again. Research has shown that the act of petting an animal, canine or feline, can cause the brain to release oxytocin. This neurotransmitter can help reduce stress, improve social skills, and reduce cravings. This is likely part of the reason that social interactions with children with autism can improve dramatically with a service dog being added to the family. For these same reasons, it makes sense that an animal would be of benefit to someone suffering from PTSD since they commonly experience flashbacks to stressful and traumatic moments, fearfulness, anxiety, a feeling of helplessness, and physical symptoms like high blood pressure, night sweats, and nightmares.

Teenagers recovering from drug and alcohol abuse often have other mental health issues such as depression, behavioral disorders, attention deficit hyperactivity disorder (ADHD), and sometimes even PTSD. A doctoral candidate from Washington State University, named Lindsay Ellsworth, is working on studies using dogs as part of the therapy program at a treatment facility for teenage males in Spokane, Washington. So far the studies are showing marked improvements in the mood, behavior, and feelings of the teenagers that interact with dogs over those assigned to games and other activities.

Unfortunately, while both the Canadian and American governments are willing to help with expenses for prescription drugs to treat PTSD in veterans, they do not fund service dogs for PTSD symptoms. The American government did and deregulated it last year. The Canadian government is currently studying it for future coverage but does not cover it at this time.

While it seems apparent that dogs have the potential to become a tool in the fight against mental illness that does not require as much medication and has far fewer side effects, more research will be required before mental health service dogs are granted the same privileges as dogs used by people with other disabilities and the coverage that is offered to people that use medication to ease their symptoms.