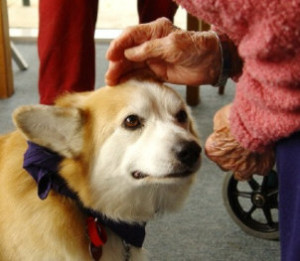 In the days following any tragedy, many people feel lost, angry, confused, and scared. This is when therapy dogs shine.

The Lutheran Church Charities K-9 Comfort Dog Ministry, in Chicago, Ill., deployed five Golden Retrievers to Boston to do what these dogs do: show unconditional love. Two of the dogs sent to Boston were actually stationed at Sandy Hook, but relocated for the time being because of Boston’s proximity to Connecticut, and because Sandy Hook students were on vacation last week.

While therapy dogs are always a welcomed site to those who need them, it is of course sad to admit we need them so often. Some of the dogs stationed in Boston will likely go to Texas soon to help people who are coping with the tragedy of the fertilizer plant blast.

It seems a therapy dog’s work is never done.

What do therapy dogs do?

“Their innate ability to know just what to do and when, was, and continues to be, uncanny,” says therapy dog handler Sherry Davis, in response to her dogs’ behavior when they went to Sandy Hook Elementary School.

Sherry brought her dogs to Sandy Hook to perform tricks, follow commands, and accept hug after hug as people flocked to them for even just one moment of respite.

Therapy dogs can be found in disaster areas, nursing homes, hospitals, hospices, alongside people with learning disabilities, and elsewhere. They have proven to help alleviate the pain, stress, and sadness of victims of even the most devastating events.

What does it take to be a therapy dog?

First, it’s important to state that therapy dogs are not service dogs, although the two often get confused. Service dogs are recognized by the Americans Disabilities Act as any guide dog, signal dog, or other animal who assists someone with a disability. Service dogs aren’t pets; they are workers who should not be handled while “on duty.”

A therapy dog, however, is a pet who has been trained to provide comfort and love to people. Therapy dogs don’t wear vests (like service dogs do), because it’s in their job description to be touched, petted and hugged. Their ability to accept strangers’ affection is what stands them apart from other animals. The simple touch of a therapy dog, by a patient in a hospice, has proven to alleviate death anxiety. Science shows us that therapy dogs help us strengthen our bonds toward other living creatures, increases our levels of dopamine (which elicits happiness) and decreases our cortisol levels (which lowers our stress).

Probably the most important trait that a training dog should have is patience and a calm temperament. They must remain calm no matter what the situation, and no matter who is nearby. This means that the dog shouldn’t be spooked or excited by loud noises, other animals, or by being handled by a group of screaming children.

A dog who portrays these traits naturally could very well become a therapy dog through ongoing obedience training, beginning as a puppy.

Therapy Dogs International (TDI) is a voluntary organization that regulates, tests, and registers therapy dogs and their handlers. If you believe your dog could qualify as a therapy dog, then the TDI is a good resource. There are TDI evaluators nationwide who can assess your dog (and you), and formally register your dog as a therapy dog.

If you’d like to get your dog on path toward becoming a therapy dogs, there are some steps you can take, including: