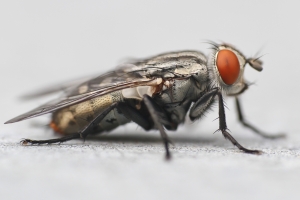 There’s a reason you can’t kill that fly with a rolled up newspaper – you’re moving too slow. At least, that’s according to a recent study led by scientists at Ireland’s Trinity College Dublin, which was published in the journal Animal Behavior. The study suggests that smaller animals with faster metabolisms, including hummingbirds and house flies, experience movement and action slower than larger animals, like humans.

How is this possible?

The study leans to evidence that these smaller animals process far more information within one unit of time … exactly the way Keanu Reeves and his crew avoided bullets in The Matrix. More than just a really cool effect, this feature is crucial toward the survival of these smaller animals, who need to be a step ahead of their many, many predators.

Furthermore, the fact that these little flies can process a ton of information in one unit of time suggests that they are smarter than we ever gave them credit for.

“Having eyes that send updates to the brain at much higher frequencies than our eyes do is of no value if the brain cannot process that information quickly,” said co-author of the study, Graeme Ruxton, in a written press release. “Hence, this work highlights the impressive capabilities of even the smallest animal brains. Flies might not be deep thinkers, but they can make good decisions quickly.”

This also opens the discussion toward an entire world of communication we slower-processing humans may not be privy to. It’s possible, according to Scottish biologist Luke McNally, who worked on the study, that animals use this variance in time perception to send signals to one another. “Larger animals may not be able to decode these signals if their visual system isn’t fast enough, giving the signallers a secret channel of communication.”

The flicker of the TV screen

Have you ever recorded your TV screen on camera, only to find that it flickers, rather than provide that nice, steady glow we all have come to love?

We have news for you – your  TV always flickers. Our eyes just happen to process the information in a way that we see a steady flow. The video camera doesn’t “see” the TV in the same way that we do. That’s why it flickers. But if we were a different animal, say a dog, we wouldn’t see our TVs in the same way. In fact, this study showed that dogs have a hard time seeing images on a TV because canine eyes have a higher refresh rate than TV screens.

The study goes on to discuss the differences found within species, such as humans. For example, we’ve all known someone with terrific hand-eye coordination, but that might be more than just a descriptor. It may be biological. Athletes can boost their eyes’ ability to track moving objects at high speeds (such as a hockey goalie or baseball batter). And time perception also seems to be affected by age. The  younger someone is, the more information they can process in one unit of time, while the older they are, the less information they can process.

Thus, perhaps we’ve been right all along. For children, time stands still. For adults, it goes by way too fast.