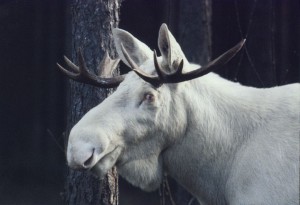 Facebook gets a lot of folks into trouble with the law, their bosses, parents … But a couple of stoked hunters up in Canada never thought they’d get the backlash headed their way when they posted a photo on Facebook celebrating their latest kill.

Their latest kill just happened to be a white moose that had wandered the woods near Cape Breton, Novia Scotia for years. The moose, which was either albino or leucistic (lacking in the pigment melanin) was considered sacred among the native Mi’kmaq people. White animals (including bison) are on par with spiritual beings.

“A moose like that represents the highest quality of a Native person,” said Emmett Peters, a Mi’kmaq ELder. “… it reminds me of integrity, courage, everything great in a leader.”

The hunters had no idea that this moose was sacred, and didn’t think twice to haul its dead body, on their truck, into the center of town. Brandon Maloney, a member of the Mi’kmaq community, approached the hunters to tell them the seriousness of their actions.

Their posted Facebook photo, however, also made matters clear. They received angry messages from people across the globe criticizing them for harming a sacred being.

Their seriousness, however, does not wade into legal matters. It is by no means illegal to hunt white moose, but it’s an unspoken rule among Native Americans that these animals are off limits.

Mi’kmaq hunter Danny Paul mentioned that “We are not to harm them in any way, shape, or form because they could be one of our ancestors coming to remind us of something significant that’s going to happen within our communities.”

The death of this white moose wasn’t by any means an intentional slight against the Native American tribe. The hunters are working with Millbrook First Nation Chief Bob Gloade to bring proper closure to this type of death. “To do the proper thing,” Gloade wrote on Facebook, “the hide of the animal requires a special ceremony to prevent bad luck and harm to the Hunters. Many Mi’kmaq people are disturbed by the actions of hunters who most likely don’t understand our culture. We must protect what is sacred and do the right thing to protect the land and life on it.”

Gloade said the hunters are handing the moose over to the Mi’kmaq so a ceremony can be conducted to honor the animal.

Other places across North America have laws against hunting white moose. In 2002, for example, Idaho enacted a law banning the hunting of these animals. Generally, 1 in 100,000 moose have the albino trait, but in Idaho that ratio is closer to 1 in 10,000.