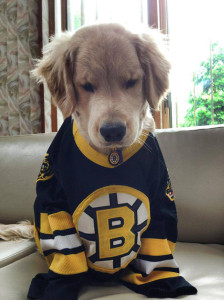 He may not play the piano, but Ray Charles the golden retriever has found fame of a different sort. He was born in December of 2012. His breeder noticed something wasn’t right about him and took him into the vet. Poor Ray Charles was blind from birth. Because it takes 10-14 days for a puppy’s eyes and ears to open after birth, it was difficult to discover the problem until he began to show a reluctance to wander about that is atypical for a golden retriever puppy.

Blindness in dogs can be caused by a number of diseases but most of them occur later in life. Blindness at birth is more likely to have been caused by a problem during pregnancy. Blind dogs can adapt and live a good, normal life. It can take a bit of time to become comfortable with the layout of their environment and some will rely on a sighted dog for some guidance in the same way that people may rely on a sighted friend to negotiate new places. Dogs that lose their sight over time do have an easier time adapting because they already know where things are located in the home and yard. Canine friends may automatically take over guiding duties when the dog has difficulty.

Owners of blind dogs can face a number of challenges and finding a home for Ray Charles proved difficult. At one point his breeders even considered having him euthanized because of his condition. Then the Fales family of Boston heard about him and decided they needed a new family member. So he joined their three golden retrievers, Jack, Harley and Maggie.

His older siblings help him with some tasks but Ray Charles is a puppy like any other and loves to play, run, and go for walks. He has even completed puppy school and is a member of the American Kennel Club’s S.T.A.R. puppy program.

He has also become an internet superstar and charmed many, including the folks at Modern Dog Magazine with his sweet demeanor. Modern Dog picked him as its photo of the week contest winner.

His owner created a Facebook page for him and it currently has over 72,000 likes. Fans have even created a few YouTube videos made from posted pictures of the adorable fellow. It turns out that, not surprisingly since he is a resident of Boston, Ray Charles is a Bruins fan and can be seen sporting his own jersey and cap in some pictures. This inspired Bruins fans to start a petition to have Ray Charles drop the puck at a Stanley Cup playoff game in Boston. At the time of writing, they hadn’t gotten their way yet but the series still has at least a few more games to go, so who knows.