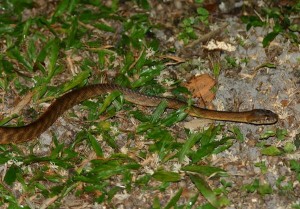 When does killing stop being terrible and start being sensible? It’s a question many ask when it comes to controlling the population of invasive species. And while there are those out there who can accept that there is a time and a place for killing a species, others don’t see it quite the same way.

Samuel L. Jackson would drop quite a number of F-bombs if he ever moved to Guam. Guam, which is only 209 square miles, is home to around 2 million brown tree snakes. These snakes are not native to Guam. They came to the island likely as accidental stowaways on plans and ships.

Seeing that they aren’t native to the island, these brown tree snakes had to find a way to adapt and survive … and they sure did. In three short decades they wiped out 10 of the 12 bird species in the area. At this rate, scientists believed the snakes would die out because they consumed their source of food.

Ah, but that was not the case. The snakes have shifted their focus to rodents, lizards, and even small mammals.

The US is pretty concerned about this, not just because Guam is under siege, but because these crafty snakes might find a way onto a plane or boat toward Hawaii. If these snakes found their way to Hawaii … well, the Department of Agriculture estimates it would cost the islands upwards of $2 billion per year.

The only solution the government has come up with is to kill the snakes – one massive genocide – in hopes of saving countless other species in Guam and other lands. The Department of Agriculture’s plan is to stuff 2,000 dead mice with acetaminophen, drop these mice from helicopters, and hope the snakes will bite … literally.

The mice will actually be outfitted with cardboard and streamers so they’ll catch in the canopy of trees, where the snakes live.

Luckily (or unluckily, depending on your stance) these snakes are some of the few to consume dead animals, and their reaction to acetaminophen is deadly. They’ll experience kidney and liver failure, fall into a coma within 72 hours, then die.

Killing to save lives … right or wrong?

It shouldn’t come as a surprise that PETA is against this. PETA’s director of cruelty investigations, Martin Mersereau, described this as a massacre and is quoted as saying, “Brown tree snakes did not ask to be stowaways on planes or ships and then forced to survive on a foreign land.”

PETA not only argues the extinction of this species, but the way it’s being handled. However, many experts believe that this outbreak of brown tree snakes began with just one single pregnant snake, thus this species knows how to spread like wildfire. Can there be a more humane way to kill the snakes that’ll prove just as effective?

As far as PETAs concern over the “massacre,” without killing these snakes, thousands and thousands of other species risk extinction, on Guam as well as elsewhere. Is it fair and right to kill one species that is merely doing what all species do (adapting to survive) in order to save another? Who is right in this argument, PETA or the Department of Agriculture? Or is there some sort of compromise that can be made?

What’s the appropriate action to take in this instance?