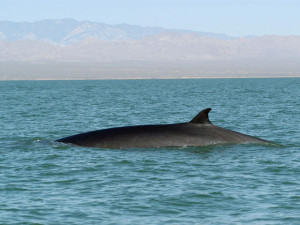 Pampered pets are seen everywhere in the US. Clothes, spas, day care, and high end pet foods are the norm for pet parents in the states. Similar to our pet loving nature, Japan also has a culture of spoiling their four legged friends. In fact, the market for high end pet supplies has recently become controversial. A Japanese firm introduced a new snack for sale on its website with an interesting new ingredient. The newest in a line of exotic pet foods is a jerky made of whale fin. But not just any whale – the North Atlantic Fin Whale. These animals are protected under the Endangered Species Act and the Marine Mammal Protection Act. Commercial whaling itself was banned internationally in 1986.

Japan imports whale for human consumption through an Iceland whaling company. The company continues to hunt whales despite the international ban on commercial whaling. The AWI reports, Icelanders have killed 496 minke whales and 280 endangered fin whales and exported over 2,800 metric tons of whale products to Japan since 2003. This discovery of endangered animal pet snacks was met with outrage.

Environmental agency’s around the world protested the use of whale in pet food. The Environmental Investigation Agency (EIA) in the UK and the Animal Welfare Institute (AWI) in the US are among the protestors. On May 31, 2013 the AWI rallied in Portland, Maine to send a message to the president of the Iceland whaling company.

Susan Millward, executive director of the US-based Animal Welfare Institute (AWI), said, “Turning an endangered whale species into pet snacks is deplorable, and seems to be nothing more than a desperate attempt to keep a cruel and unnecessary industry alive at any cost.”

The controversial whale meat snacks, sold by the Tokyo-based company Michinoku Farm, are available in three different sizes, ranging from a 60g bag costing £4 (609 yen) to 500 gram bag for £25 (3,780 yen), as reported by the telegraph.

Within hours of this public outcry the whale treats were removed from the Japanese website. However, the world of exotic pet treats is still very active. Japanese pet parents can still purchase pet snacks made of Australian kangaroo meat or Mongolian horse meat. The Icelandic whaling company has no plans to discontinue their services.