Home News Bears Don’t Really Hibernate. So Who Does? 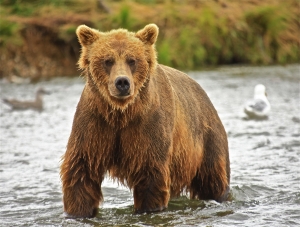 Few things have been so controversial in this world than the debate over whether a bear hibernates. Okay, that might not be entirely true; however, seeing as we’ve been told since we were wee lads that not only do bears hibernate, but they are the poster child of this wintertime slumber, it’s a bit disturbing to realize that all of it might have been a ruse.

In fact, turns out the bear might just be extremely lazy and lethargic during the cold months. Who can blame them? Alas, there are animals who do, in fact, hibernate. Yet those who do hibernate pale in comparison to the majestic size and presence of bears, which is why, perhaps, we’ve been lied to for all these years. Thinking a bear hibernates just sounds cool, right?

While we all think of hibernation as passing the wintertime in sleep mode, there’s more to it than that. In fact, if a long sleep defined hibernation, then bears would technically hibernate, as would anyone north of Florida. But hibernation is a form of metabolic suppression that serves as a survival tactic for animals during times of energy crisis. Actually, some animals live most of their lives in a state of hibernation, meaning we could go as far as to say that their ridiculously low metabolic rate (like, near death low) is normal for them, and not hibernation. We correlate hibernation with the winter, justly so, but animals can also rely on this survival skill during times of extreme famine or drought. In the end, the purpose of hibernation is to preserve energy during expected times of food scarcity (hence why we see animals hibernate during the winter).

So who does hibernate?

If bears have let us down, is it possible that no other animal on this planet hibernates? Is hibernation synonymous with unicorns and fat-free fat – myths?

No, my friends, there are animals that do in fact past the criteria set out by the hibernation police. They include:

Sure we can! We say that Columbus discovered that the Earth was round (no one back then really believed it was flat, except for the same people who today believe that we’re aliens from 10,000 years in the future who have lost our way). So why can’t we say bears hibernate? For all intents and purposes, they do. They experience metabolic suppression and some data suggests that adult-sized bears can reduce their metabolic rate some 75% below normal. So while other hibernators drop their body temperatures way down (and bears don’t), bears still can do some pretty remarkable things with their body to survive the winter. Not to mention bears can recycle their urine.

Yes, they recycle their urine so that they don’t have to get up and pee for months. If that’s not worth some type of prize, I don’t know what is.