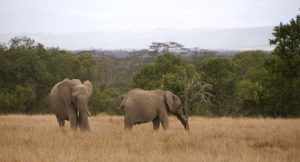 Sometimes we forget that despite our amazing and seemingly human-specific characteristics, we are, in fact, still animals. Which is why it shouldn’t be so surprising that animals share similar emotional responses as we. This includes the emotional need to mourn. Here are a list of some animals that mourn their dead, and how they get through the grieving process.

Chimps – Chimps are extremely related to humans, genetically speaking, which is why it’s likely not all that surprising that they mourn after losing a loved one. Their responses include refusing to eat, pouting and even crying.

Dogs – In a different take on “losing a loved one,” while we consider dogs to be a man’s best friend, there seems to be no doubt that man is a dog’s bestie. If a dog outlives his owner, that dog very often will show signs of deep loss, including long battles with lethargy, and, for all intents and purposes, depression.

Elephants – Perhaps the most widely documented evidence of mourning, elephants have been known to shed tears and bury their dead. In more than a handful of occasions, mourning elephants have starved themselves so severely, that they died.

Geese – Many animal species mate with several partners over a lifetime, while there are quite a number of animals that choose one mate for live. Geese are all about monogamy, which while romantic, also makes it hard on a goose who loses his or her partner. While the goose in mourning will take time to grieve, one of the most interesting results of the recent loss, is that goose will usually find a new partner over time … one who has also lost his or her loved one.

Giraffes – In a Kenyan conservancy, in 2010, a female giraffe spent four days beside the body of her one-month-old calf. A swarm of other female giraffes came to show their support over those days as well. Several instances of similar events have been documented across African conservancies.

While all of this “evidence” is fine and good, scientists like to have hard-fastened data to hang their hats on. Which is why there have been brain studies (on both humans and animals) to see if there is any correlation among species.

Our own mourning is done (or facilitated) through our frontal cortex, a section of the brain that other animals do possess. There is one theory that the mechanisms at work when we, or animals, grieve, are embedded in our brains from eons ago.

Then again, there are naysayers. Many scientists claim that most, if not all, actions are done for other purposes than for emotional responses such as grieving. Take, for example, the actions of a crow.

Crows, like geese, form lifelong pairs. Thus when their lifelong partner passes on, you can find a crow flock to the body of the deceased, and call to other crows, seemingly as a cry for support.

But many scientists suggest there’s more to it than grief. These crows could, in fact, be trying to determine what killed this animal, in an effort to preserve themselves and the rest of their flock.

Have you heard (or seen) of an animal mourn? Think it’s just a bunch of garbage, to do we tend to think too little of the emotional capabilities of other animals? We’d love to hear from you.