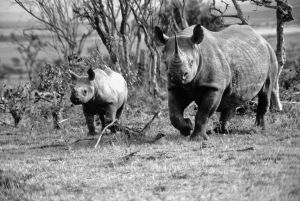 Here’s a little fact: there are 4,000 black rhinos in the entire world, down from 70,000 in the 1960s. Here’s another fun fact: the purpose behind the permit to kill one old black rhino in Africa for $350,000 was to help encourage the rest of the rhino population to flourish. Like survival of the fittest – with a gun.

At least, that’s the reason, according to the club’s executive director, Ben Carter.

“Science shows that selective hunting helps rhino populations grow,” he said in a prepared release. “Removing old, post-breeding bulls, which are territorial, aggressive and often kill younger, breeding bulls, cows and even calves, increases survival and productivity in a herd.”

He also said the money raised from the auction will go toward rhino conservation, but his critics have their doubts.

But let us assume that what Carter says is true. That the killing of this essentially space-hogging black rhino will serve to help countless other rhinos down the road. Should we look at this $350,000 kill-contract, er, auction, as something more beneficial?

Is this a case of “if you want to make an omelette, you have to break a few eggs,” with the omelette being a healthy population of black rhinos, and the egg being the soon to be departed black rhino with the date with death?

Or is this just one sick joke that is far from funny?

A life and reputation is at stake

Critics of the Dallas Safari Club’s auction say that this puts America in a poor light for the rest of the world to see.

“This auction tells the world that some Americans will pay anything for the opportunity to kill one of the last of a species,” said Jeffrey Flocken of the International Fund for Animal Welfare.

And isn’t that true? In the end what truly is the difference between killing a black rhino for $350,000, or a black bear? What is it about some hunters who want to help finish off a species?

There was a massive frenzy when it was believed our beloved Twinkie was going the road of the Dodo Bird. We had to get our hands on the staple item of Hostess. Most of us gobbled up these Twinkies, literally. Others with an entrepreneurial spirit perhaps looked to resell their Twinkies for a higher price.

But perhaps there was an entire other sector of people I knew nothing about – a group who aimed to stick a fork in the side of a Twinkie, only to empty it of its cream, pretty it up and hang it on a plaque above their fireplaces, all so that they could say that while other people worked their butts of finding ways to save the doomed Twinkie, they were one of the lucky few to not only grab this dying breed, but hold onto its stuffed corpse to cast their eyes upon their handiwork.

But maybe, all the while, these folks were stabbing Twinkies with forks because they believed their work helped to allow other, more spry Twinkies, to thrive. So, in reality, these forkers are heroes?

Maybe if we just think of the black rhino like a Twinkie we’d better understand and revere the hunter who paid $350,000 to kill an animal?

Who is this hunter?

It probably goes without saying that the identity of the hunter who has paid a handsome fee for the chance to kill a black rhino has gone unreleased. Death threats have been circulating ever since news was released about this auction. But the hunter will travel to Namibia to “claim” his or her prize. But you have to wonder, how difficult is it to kill an older black rhino? Wouldn’t you think that younger, more energetic rhinos are quicker on their feet, and more animated? Wouldn’t they offer more of a challenge to hunters (who claim that the challenge is more than half the fun)?