Home Behavior & Training Why Dogs Respond So Well to Rewards 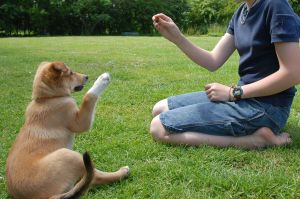 We take it for granted, don’t we? We just assume our dogs will do everything we ask them to, so long as we have a treat in hand. But that’s not entirely true, right? Dogs won’t put themselves into harm’s way for a biscuit, will they? They do possess some normal instinct for self-preservation … or do they?

An experiment last year, at Emory University, and corroborated with a recent experiment, shows that a canine’s reward center, or caudate region, is very much like a human’s (and we all know how much we like rewards), and far more progressed than most other animals. The caudate region (at least in humans), is associated with decision-making, motivation, and processing emotions, suggesting that dogs make decisions in a similar way that humans do (deal-hungry Black Friday shoppers come to mind). Furthermore, it appears that dogs trained to become service or therapy dogs have a far more active caudate region than their brethren. Does this mean they’re actually smarter than other dogs?

Dogs and an MRI

In order to examine the dogs’ brains, these dogs had to be trained dogs to acclimatize to an fMRI machine. An fMRI, much like an MRI, requires the subject to sit perfectly still while the machine makes massive noises and vibrations. That’s a tall task to ask of humans (who often need to gather their wits before going in that tube), let alone a dog. The fact that the dogs were able to sit still during the commotion, in and of itself, lends to the reality that, if promised a treat, dogs are willing to do nearly anything.

The dogs in the experiment were given a brain scan as they watched a human offer up hand signals that the dogs were trained to understand. One signal indicated that the dog would get a hot dog treat, while another signal meant the dog wouldn’t get a treat. Eight out of 13 dogs showed a positive caudate response to the hand signal for a treat, which was a result nearly identical to one conducted years earlier on humans. In that experiment, 11 out of 17 humans showed a positive caudate response to a reward (fruit juice).

All of the service or therapy dogs in the experiment showed positive caudate reactions to the treat, meaning they scored 100% on the test. This led scientists to wonder if those results had to do with the type of breeds of the dogs, or because these dogs were trained to respond that way.

“I don’t think it was because they liked hot dogs more,” said lead researcher Gregory Berns, director of Emory’s Center for Neuropolicy. “I saw no evidence of that. None of the dogs turned down the hot dogs.”

It’s possible that it’s a combination of both nature and nurture, meaning perhaps it’s true that some breeds make better service/training dogs than others.

One reason behind the dog’s refined caudate region might be because of its role in human society, which dates back some 30,000 years. Not only used as pets, we’ve asked dogs to take on extremely important and complex roles, including performing search and rescues, leading the blind, and more. These centuries of working with us have likely strengthened the canine’s reward center, thus making them even stronger human helpers than ever before.

A stranger’s hand vs. your own

It’s possible that a dog’s highly functional reward center (coupled with its lack of reasoning) could be a detriment. Beyond putting itself in harm’s way for a treat, dogs could easily be lured by unsavory folks. But the Emory researchers plan on conducting a new study, in the near future, that’ll study the dogs’ response to hand signals offered up by the dog’s owner, a stranger, and a computer.

This experiment could help us to see if dogs really do love “us,” or they just love that we give them treats all the time.